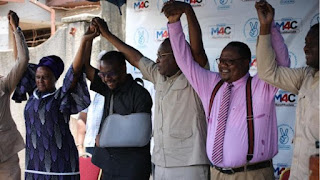 Tanzania’s main opposition parties, Chadema and ACT-Wazalendo, want a run-off election in the country. The two parties are vying for the results of Wednesday’s election in which incumbent President John Magufuli has been declared the winner. At a joint press conference between Chadema leaders and ACT Wazalendo the parties also called for a nationwide protest to demand a re-run of the election.

The parties are now seeking the dissolution of the NEC and ZEC. The parties have also called on Tanzanians to hold peaceful protests. “From Monday, members of our parties and all those who do not agree to take part in the peaceful protests from November 2 until our demands are dropped,” they said.